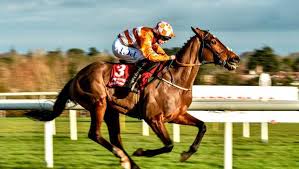 The Triumph Hurdle kicks off the final day of the 2020 Cheltenham Festival and what a puzzle it is. You have three front runners heading the betting in the shape of Aspire Tower, Allmankind and Goshen.

All three have been very impressive this season bar when Aspire Tower fell at the last at the Dublin Racing Festival before been asked for the maximum effort from his jockey Rachel Blackmore.

You then have Allmankind who himself is a free going sort along with Goshen. How this race will pan out is another thing. Do at least two of them take each other on? Will that set it up for someone at a bigger price to come and spoil the party.

I can not make head nor tales of this after Aspire Towers fall as I was so sure that he was the winner of this. But, when reflecting on things I think this will suit him. If his market rivals take each other on and it will take a strong staying performance to win, and staying is what Aspire Tower does.

Take away his fall, he has done nothing but impresses in the way he wins despite his greenness and I am willing to take a chance that he will be back to his flying best.

I think with Goshen his jumping will be his downfall at the business end, but I can see Allmankind sticking on well to keep a place.

I would be lying if I said that I fancied anything else because at the end of the day they are 4-year-olds and you don’t know what kind of improvement some might show but as I said I am quite sweet on Aspire Tower.

The horse that benefited from Aspire Towers fall, A Wave Of The Sea is overpriced at 14/1 and will be my each-way selection.

At the end of the day, he is a Grade 1 winner and on that showing, he is overpriced.

The Albert Bartlett has a reputation for being a nutritious hard race for lightly raced horses as every year it seems to be won by a horse that has had at least five runs over hurdles, but, I think this year will be an exception. I have this narrowed down to two horses and I am finding it hard to split them. Those two are Thyme Hill and Latest Exhibition.

Thyme Hill has impressed me ever since he has gone over hurdles, and what impresses me most is that he has the fighting quality that he brings to the table. His back class of been placed in last season Cheltenham Festival bumper is another plus as most horses that run in Champion Bumpers do need a trip in time.

His form over hurdles this season is stacking up very well. He beat Fiddlerontheroof who has since gone on to win the Grade 1 Tolworth Hurdle at Sandown, beat the ultra-consistent Champagne Wells at Cheltenham before going on to beat hugely improved and The Cashel Man. So, I think Thyme Hill will be extremely had to keep out of the winner’s enclosure.

His first run over hurdles was over 2 milers at Galway where he won very well. He followed that up with a second-place behind Supreme Novice Hurdle hope Abacadabras when he looked in need of a trip. Latest Exhibitions trainer Paul Nolan was of the same view as he stepped him up to 2m4f where he went of to beat the hugely talented Andy Dufrene in a titanic battle at Navan.

Horses that were in behind him at the Dublin Racing Festival where Cobblers Way, Longhouse Poet, Fury Road and Elixir D’ainay. Halfway down the back straight at Leopardstown, he was getting niggled along but once Brian Copper got stuck into him he kept finding and finding for his jockey.

As I write this I am gone to the few that Latest Exhibitions form is by far the best in the field. I think if a horse finishes in front of him will be the winner, but, I am really sweet on his chances now.

If you like a forecast bet then I think this could be one to get stuck into with Latest Exhibition and Thyme Hill. 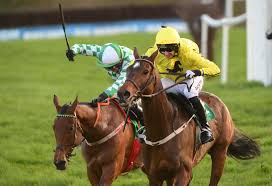 The Foxhunters, the Gold Cup for amateur riders. This is one of my favourite races of the week as we are likely to see some old times have one last shot at Cheltenham glory while plying their trade at the Point To Point scene.

This year is no different as we have former National Hunt Chase winner and Gold Cup placed Minnella Rocco heading the market after two recent wins and one of them was beating his fellow market leader in Hazel Hill.

But, one that I like and is kind of one that has gone under the radar despite his latest win is the Willie Mullins trained Billaway.

Billaway was second on his first start of the season at Down Royal where he really caught the eye in running, but he made no mistake next time out when powering clear to win by 8 lengths at Naas. Patrick Mullins has been very keen on him since day one and I have great faith that we have not seen the best of him yet as he has only had ten runs in his who life which includes Point To Points.

You also have former Grade 1 winner in Don Poli aka Don Slowly in the lineup, who himself has been transformed this season but I don’t think he will have the boot when it is called upon to play a hand in this. So, that leads me onto my each-way pick in Top Wood.

Placed in this last year before going on to take the equivalent race over the National fences at the Grand National meeting. He has been brought along nicely this season with two very satisfactory runs when finishing second and sixth respectfully. A stalworth in these races I think it will be hard to keep him out of the money. 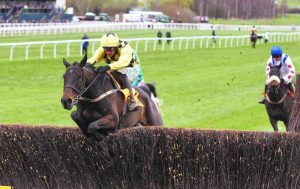 The holy grail of jumps racing, the Gold Cup is the highlight of day four if not the week. This is shaping up to be one of the races of the season with the line up of the defending champion Al Boum Photo, Irish Gold Cup winner Delta Work, Santini, Kemboy, Lostintranslation, Clan Des Obeaux.

But is there questions about some if not most? Well, yes. Santini has not been that impressive at all this season but did beat last season third in Bristol De Mai while puts some substance to his form but if you go back and watch that race there were two crucial mistakes that cost Bristol De Mai, so, not even on the back of that could I comprehend him for a Gold Cup.

That takes me onto Kemboy who has had a bad preparation, which is no fault of the trainer our new owners, as the former runners of the syndicate were thrown our of racing for selling false shares. But, Kemboy came back at Christmas time and ran a race of a horse that needed the run. Fast forward to the Dublin Racing Festival and the Irish Gold Cup where he ran a much better race be it that his jumping was still very sticky for his standards. To me, he will need to come on a lot for that run again and prove himself as a proper stayer as all his good Grade 1 wins have been on flat tracks over 3 miles, so will the extra 2 1/2f find him out? Only time will tell.

That brings us nicely onto the Savills Chase and Irish Gold Cup winner Delta Work. There was a lot expected for this lad after this season but he had a horrible start at Down Royal where his jumping frailties came to the fore when he was beaten out of sight in the JNWine Chase in which Clan Des Obeaux was second to Road To Respect.

But when it came to the Savills Chase at Christmas he was put in a much better display under a very good ride from Jack Kennedy who took him wide the whole way around before producing him at the last to win. He did much the same at the Dublin Racing Festival so he is for sure a big player this year

But, here is my pick. I put him up last year at 20/1 and he got the job done in tremendous style and there is no reason in my mind why he can not be the 1st horse in decades to win back to back Gold Cups, and that horse is, of course, Al Boum Photo.

He has had the same prep as last year where he took the Grade 3 Savills Chase at Tramore and goes straight to the Gold Cup. While the pretenders to his crown were battling it out at the Dublin Racing Festival this lad was taking it easy back in Closesutton.

The more I get stuck into the race the more I can see Al Boum Photo winning back to back Gold Cups. He has that staying power with pace that can get him into any position that Paul Townend wants him to go into. When summed up, he is the whole package.

One that I also really like and who I think will be placed at worst is the Colin Tizzaed trained Lostintranslation.

If you take out his well below-par run in the King George you can’t but be impressed by the way he won the Betfair Chase where he beat course specialest, Bristol De Mai. He has class, his jumping is a huge asset and you can put him anywhere in a race, be it up with the pace or dropped out, he is effective anywhere.

An honourable mention goes to King George winner Clan Des Obeaux, but to me, he doesn’t get the Gold Cup trips as was seen last year. He travelled well into the home turn but when the taps were turned on he faded away up the hill.

So with all that said, I am really sweet on Al Boum Photos chances of winning back to back Gold Cup. A small bit of advice I would give you if you are backing Al Boum Photo is to wait for the day because you will get two horse that people will latch onto and that will for sure push Al Boum Photo out in the betting, because people will not like the fact that he is coming here on the back of a run, at Tramore.

But hey, if it’s not broke don’t fix it.

Smarkets vs Betfair – The Alternatives to Matchbook

Betopin.com (Betting Opinion) is a comparison service for online betting and gambling companies. Our platform allows people to give their opinion on betting services to help others find the best service for their needs. We provide an independent comparisons and may receive a form of compensation for including some companies in the tables.

Never bet with money you cannot afford to lose. For help with gambling addiction you can contact Gamble Aware or Gamcare

If you would like to suggest a site for review or advertise on Betopin.com you can find out more about the process here.